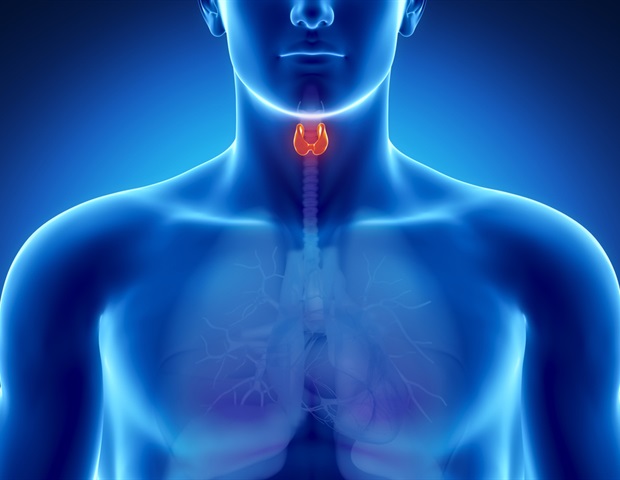 Fusion oncogenes, such as RET- and NTRK-gene fusions, are associated with more invasive pediatric thyroid cancers, correlating with the highest risk of metastases and a lower likelihood of achieving remission one year after initial therapy, according to a new study by researchers at Children’s Hospital of Philadelphia (CHOP). The findings, which were published in the Journal of Clinical Oncology, contrast those previously established in adults, for whom BRAF mutations, not fusion oncogenes, are associated with more invasive disease that is less response to therapy.

“This study shows fusion oncogenes are more prevalent in pediatric thyroid cancer that is likely to spread to the lungs, whereas tumors with RAS-like and BRAF mutations are associated with low- and intermediate risk, respectively,” said Andrew J. Bauer, MD, Director of the Pediatric Thyroid Center at Children’s Hospital of Philadelphia and senior author of the study. “This provides an opportunity for increased collaboration among surgeons, endocrinologists, and oncologists to stratify the treatment of tumors, approaching RAS-like mutations with less extensive surgery, while also exploring the new treatment protocols using FDA-approved oncogene specific inhibitors to optimize the treatment of patients with lung metastasis.”

The results from the CHOP thyroid team are a pediatric-specific follow-on study to the 2014 Cancer Genome Atlas (TCGA) report that classified adult papillary thyroid cancer (PTC) into two molecular subtypes – RAS-like or BRAF-like – and concluded that molecular classification more accurately reflected tumor behavior, including disease severity and prognosis. To determine whether the adult based TCGA classification predicted the similar clinical behavior and outcomes in pediatric patients with DTC, the CHOP researchers analyzed 131 pediatric thyroid tumors. Of those, 66 were collected and sequenced using the CHOP Division of Genomic Diagnostics platform between 2016 and 2019, with the remaining 65 collected between 1989 and 2012 and sequenced on a commercial platform. In analyzing the sequenced samples, the researchers categorized mutated genes into three categories: RAS-mutant, BRAF-mutant, and RET/NTRK fusions. The researchers evaluated these categories against numerous parameters, including patient demographics, thyroid pathology, and clinical characteristics.

The researchers found that the three-tier classification system more accurately reflected the clinical behavior of DTC in pediatrics. Based on the low prevalence of RAS-mutant tumors among the pediatric samples and their low-risk of metastasis, the CHOP researchers limited their statistical analysis to comparing samples with a BRAF mutation to samples with RET/NTRK fusions. The researchers found no distant metastasis in any patients with BRAF-mutant thyroid tumors, whereas 36% of patients with RET/NTRK fusions had distant metastasis. Persistent disease at one year was also more frequent in the subgroup harboring RET/NTRK fusions: 36% vs. 17% among those with a BRAF mutation.

“Considering the high prevalence of RET/NTRK fusions in pediatric differentiated thyroid cancer, and their association with more metastatic behavior, it will be crucial to generate the transcriptional signatures of RET/NTRK and BRAF-mutant subgroups in the pediatric population to understand the differential impact of these alterations on signaling pathways, differentiation, and clinical outcomes,” said first author Aime T. Franco, PhD, investigator in the Center for Childhood Cancer Research and director of the Pediatric Thyroid Cancer Translational Research Laboratory at Children’s Hospital of Philadelphia. “Future research in our Thyroid Center Frontier Program at CHOP will also investigate the underlying reason for the significant differences between children and adults when it comes to invasive disease, as well as the role of BRAF and RET/NTRK in response to radioiodine therapy.”