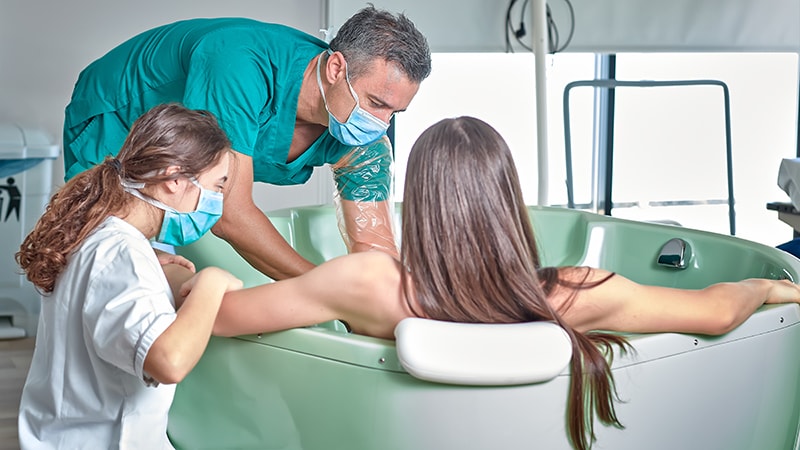 Alternative birthing practices, such as water births, placentophagia, and lotus births, are making news and gaining popularity. All three have been associated with sporadic, serious neonatal infections.

The U.S. prevalence of water births – delivering a baby underwater – is currently unknown, but in the United Kingdom the practice is common. According to a 2015 National Health Service maternity survey, approximately 9% of women who underwent vaginal delivery opted for water birth (Arch Dis Child Fetal Neonatal Ed. 2016 Jul;101[4]:F357-65). Both the Royal College of Obstetricians and Gynaecologists and the Royal College of Midwives endorse this practice for healthy women with uncomplicated term pregnancies. According to a 2009 Cochrane Review, immersion during the first phase of labor reduces the use of epidural/spinal analgesia (Cochrane Database Syst Rev. 2009. doi: 10.1002/14651858.CD000111.pub3). The maternal benefits of delivery under water, though, have not been clearly defined.

Another recent systematic review and meta-analysis that included 29 studies of water birth did not identify definitive evidence of neonatal harm, but benefits also were uncertain (Arch Dis Child Fetal Neonatal Ed. 2016 Jul;101[4]:F357-65). Investigators acknowledged that most of the studies of neonatal outcomes were small, observational, and included only low-risk mothers. Case reports document rare but potentially fatal complications in babies, including drowning, respiratory compromise from aspiration, cord rupture, and infection. One study showed increased rates of admission to a neonatal unit without difference in Apgar scores or infection rates (BMJ. 2004;328[7435]:314).

Legionella pneumophila is an uncommon pathogen in children, but cases of neonatal Legionnaires’ disease have been reported after water birth. Two affected babies born in Arizona in 2016 were successfully treated and survived (MMWR Morb Mortal Wkly Rep. 2017. doi: 10.15585/mmwr.mm6622a4). A baby born in Texas in 2014 died of sepsis and respiratory failure (Emerg Infect Dis. 2015. doi: 10.3201/eid2101.140846). Canadian investigators have reported fatal disseminated herpes simplex virus infection in an infant after water birth; the mother had herpetic whitlow and a recent blister concerning for HSV on her thigh (J Pediatric Infect Dis Soc. 2017 May 16. doi: 10.1093/jpids/pix035).

Admittedly, each of these cases might have been prevented by adherence to recommended infection control practices, and the absolute risk of infection after water birth is unknown and likely to be small. Still, neither the American Academy of Pediatrics nor the American College of Obstetricians and Gynecologists currently recommend the practice. ACOG suggests that “births occur on land, not in water” and has called for well-designed, prospective studies of the maternal and perinatal benefits and risks associated with immersion during labor and delivery (Obstet Gynecol. 2016;128:1198-9).

Placentophagia – consuming the placenta after birth – has been promoted by celebrity moms, including Katherine Heigl and Kourtney Kardashian. Placenta can be cooked, blended raw into a smoothie, or dehydrated and encapsulated.

Proponents of placentophagia claim health benefits of this practice, including improved mood and energy, and increased breast milk production. There are few published data to support these claims. A recent case report suggests the practice has the potential to harm the baby. In June 2017, Oregon public health authorities described a neonate with recurrent episodes of group B streptococcal (GBS) bacteremia. An identical strain of GBS was cultured from capsules containing the mother’s dehydrated placenta – she had consumed six of the capsules daily beginning a few days after the baby’s birth. According to the Morbidity and Mortality Weekly Report communication, “no standards exist for processing placenta for consumption” and the “placenta encapsulation process does not eradicate infectious pathogens per se. … Placenta capsule ingestion should be avoided”(MMWR Morb Mortal Wkly Rep. 2017;66:677-8. doi: 10.15585/mmwr.mm6625a4).

Finally, the ritual practice of umbilical cord nonseverance or lotus birth deserves a mention. In a lotus birth, the umbilical cord is left uncut, allowing the placenta to remain attached to the baby until the cord dries and naturally separates, generally 3-10 days after delivery. Describing a spiritual connection between the baby and the placenta, proponents claim lotus birth promotes bonding and allows for a gentler transition between intra- and extrauterine life.

A review of PubMed turned up no formal studies of this practice, but case reports describe complications such as neonatal idiopathic hepatitis and neonatal sepsis. The Royal College of Obstetricians and Gynaecologists has issued a warning about lotus births, advising that babies be monitored closely for infection. RCOG spokesperson Patrick O’Brien said in a 2008 statement, “If left for a period of time after the birth, there is a risk of infection in the placenta which can consequently spread to the baby. The placenta is particularly prone to infection as it contains blood. Within a short time after birth, once the umbilical cord has stopped pulsating, the placenta has no circulation and is essentially dead tissue.”

Interestingly, a quick scan of Etsy, the popular e-commerce website, turned up a number of lotus birth kits for sale. These generally contain a decorative cloth bag as well as an herb mix containing lavender and eucalyptus to promote drying and mask the smell of the decomposing placenta.

A friend of mine who recently delivered a baby did not choose any of these alternative birthing practices, but she told me that she understood why some women might. “Peer pressure,” she said. “There’s so much information on social media and on ‘mommy blogs.’ Some of the women posting have really strong opinions. … They can make you feel like a bad mom for not choosing what they call the most ‘natural’ option.”

In contrast, many pediatricians, me included, are not well informed about these practices and don’t routinely ask expectant moms about their plans. I propose that we can advocate for our patients-to-be by learning about these practices so that we can engage in an honest, respectful discussion about potential risks and benefits. For me, for now, the risks outweigh the benefits.

Bryant is a pediatrician specializing in infectious diseases at the University of Louisville (Ky.) and Norton Children’s Hospital, also in Louisville. She said she had no relevant financial disclosures. Email her at pdnews@frontlinemedcom.com.