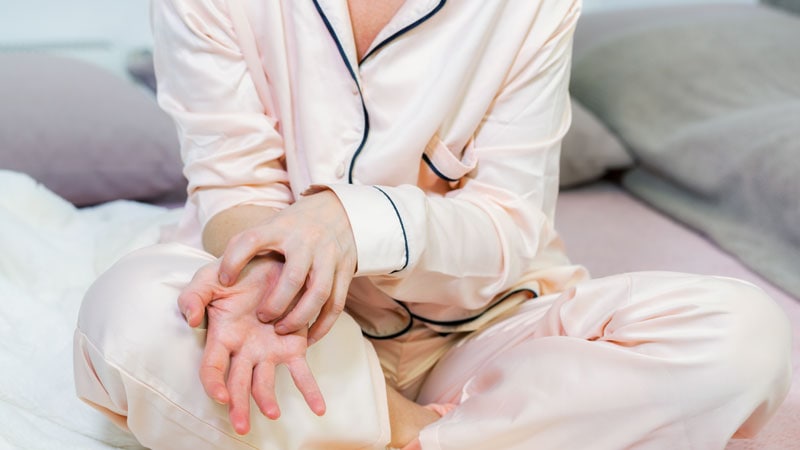 If you don’t think it’s important to assess for sleep disorders in your patients with atopic dermatitis (AD), think again.

During the Revolutionizing Atopic Dermatitis symposium, she offered key questions to ask AD patients who present with sleep complaints:

When do you go to bed? ”This does not refer to when you get into bed, but when do you actually go to bed with an intention to go to sleep, outside of watching television or answering emails?” Abbott said.

How long does it take for you to fall asleep? Do you wake up in the middle of the night, and for how long? What do you do if you wake up?

When do you wake up in the morning? Is it on your own, or with an alarm clock?

Does this schedule change on nonworkdays? Do you have daytime impairment? Meaning, do your sleep complaints impact how you function during the daytime?

Do you snore? Meaning, is there concern for sleep apnea?

Do you have uncomfortable sensations in your legs? Are they worse in the evening and improve with movement? These are signs of possible restless legs syndrome.

The Epworth Sleepiness Scale is one self-administered questionnaire to consider using for AD patients with sleep complaints. “This provides patients with several examples of typical scenarios they might encounter during the day and queries whether or not they feel that they could deal with any of those scenarios,” Abbott said. “A score of greater than 10 indicates that they are sleepy; it’s not just an overall sense of fatigue and decreased energy.”

Other brief self-assessment tools she recommended are the Insomnia Severity Index and the STOP-Bang questionnaire.

Abbott reported having no financial disclosures.

Ongoing Artemis moon rocket’s final prelaunch test faces issues on the launchpad
LGBTQ Students Would Get New Protections Under Biden Plan
Health inequalities: Why is it harder for some people to eat healthily?
Typhoid Fever Bacteria Becoming More Resistant to Antibiotics
Researchers analyze the way in which social ties may demonstrate a kind of bipolarity