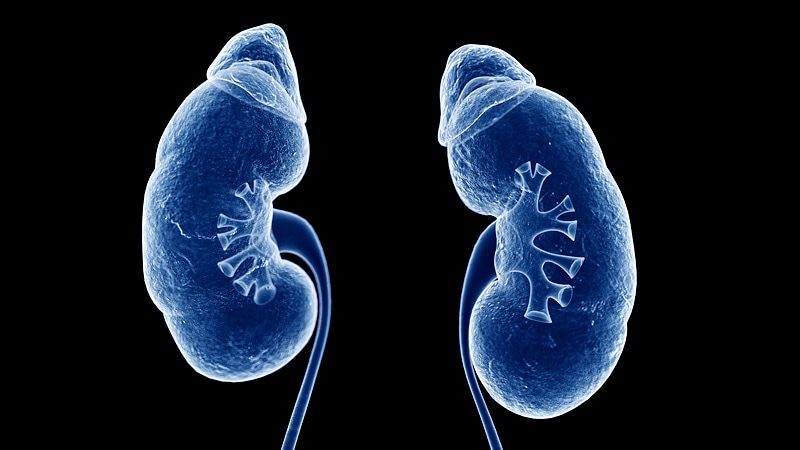 Models using novel kidney and cardiac biomarkers were the most effective predictors of 10-year risk for atherosclerotic cardiovascular disease in chronic kidney disease patients, in a new study.

Chronic kidney disease (CKD) patients may be at increased risk for atherosclerotic cardiovascular disease, but no ASCVD risk prediction models are currently in place to inform clinical care and prevention strategies, Joshua Bundy, PhD, of Tulane University, New Orleans, and colleagues wrote in their paper, published in the Journal of the American Society of Nephrology.

To improve the accuracy of ASCVD risk prediction, the researchers developed several models using data from the Chronic Renal Insufficiency Cohort (CRIC) study. This longitudinal cohort study included more than 2,500 adult CKD patients. The participants’ ages ranged from 21-74 years, with the mean age having been 55.8 years, and 52.0% of the cohort was male.

A total of 252 incident ASCVD events occurred during the first 10 years of follow-up from baseline (1.9 events per 1,000 person-years). Patients with ASCVD events were more likely to be older, Black, and current smokers. They also were more likely than those who did not experience ASCVD events to have less than a college level education, to have a history of diabetes, and to use blood pressure–lowering medications.

“In our study, we created two new prediction tools for patients with CKD: the first is a simple model that includes factors routinely measured by health care providers and the second is an expanded model with additional variables particularly important to patients with CKD, including measures of long-term blood sugar, inflammation, and kidney and heart injury,” he explained. “We found that the new models are better able to classify patients who will or will not have a stroke or heart attack within 10 years, compared with the standard models. The new tools may better assist health care providers and patients with CKD in shared decision-making for prevention of heart disease.”

The area under the curve for a prediction model using coefficients estimated within the CRIC sample was 0.736. This represented an accuracy higher than the American College of Cardiology/American Heart Association Pooled Cohort Equations (PCE), which have shown an AUC of 0.730 (P = .03). The PCE were developed by the ACC and the AHA in 2013 to estimate ASCVD risk in the primary prevention population.

The second CRIC model that was developed using clinically available variables had an AUC of 0.760. However, the third CRIC biomarker-enriched model was even more effective, with an AUC of 0.771 – significantly higher than the clinical model (P = .001).

Both the clinical and biomarker models improved reclassification of non-ASCVD events, compared with the PCEs (6.6% and 10.0%, respectively).

Patients who had an ASCVD event had higher levels of A1c, systolic and diastolic BP, urinary ACR, troponin T, and NT-proBNP; these patients also had lower levels of HDL cholesterol, eGFR, and A1c, compared with those who did not have an event.

The study findings were limited by several factors including the selection of study participants based on a single assessment of kidney function, who had an above average baseline ASCVD risk, the researchers noted. Other limitations included the inability to include imaging variables in the models, and the overestimated risk in the highest predicted probability groups in the CRIC study.

However, the models significantly improve prediction beyond the ACC/AHA PCE in patients with CKD, they concluded.

The development of new prediction models is important, because cardiovascular disease is the leading cause of death among U.S. adults and preventing CVD is a major public health challenge, lead author Bundy said in an interview.

“In an effort to prevent CVD, risk prediction equations can help identify patients who are at high risk for developing CVD and who may benefit from initiation or intensification of preventive and/or therapeutic measures. Simultaneously, chronic kidney disease is prevalent and those with CKD are often considered at high risk for CVD,” he said.

“However, common risk prediction tools were developed for the general population and may not work as well in patients with CKD, who may have different risk factors. Improving risk prediction in patients with CKD may help identify those among this growing population who are truly at high risk, as well as identify those who are at low risk and less likely to benefit from invasive procedures,” Bundy explained.

Glomerular Filtration Rate Was Not a Strong Predictor of Atherosclerotic CVD

“One of the surprising findings was that estimated glomerular filtration rate was not a strong predictor and was not included in our final models,” Bundy said.

“We know that eGFR is a very important measurement in this population, but our results suggest that, at least in our sample, urinary albumin-to-creatinine ratio and cardiac biomarkers like troponin T and NT-proBNP are stronger predictors of atherosclerotic CVD in a population with reduced kidney function,” he said.

“Patient characteristics like age, blood pressure, and cholesterol are used by health care providers to predict whether a person will have a heart attack or stroke. However, most currently available prediction tools were not made for use in patients with CKD, which is a condition that is becoming more common and is likely to be seen by more health care providers in family practice,” said Bundy. “These people with CKD may have different risk factors for heart disease.”

Models Are Useful for Clinical Practice

“We are seeing rising numbers of patients with CKD in the population because of increasing age, rising rates of diabetes, and hypertension,” Noel Deep, MD, said in an interview. “The current practice of medicine does not have CKD-specific prediction models for ASCVD development, and current risks are calculated based on prediction models developed for the general population.”

“Having a prediction model that incorporates criteria/variables associated with CKD improves our ability to accurately identify and address the risk of ASCVD in this particular patient population,” said Deep, who is a general internist in a multispecialty group practice with Aspirus Antigo (Wisc.) Clinic and the chief medical officer and a staff physician at Aspirus Langlade Hospital, also in Antigo.

“We always knew that CKD does place the individual at higher risk for developing ASCVD, but I was impressed by the significant improvement in the prediction models using CKD specific tools, such as cardiac biomarkers (NT-proBNP), intensity of diabetes control (A1c), tobacco use, urinary albuminuria, in addition to advancing age,” he said. “Many of the laboratory tests listed in this study are commonly available and can be easily incorporated into our evaluation for and management of ASCVD in our patients with CKD.”

“As a practicing primary care physician, I would say that this study emphasizes the importance of identifying and working toward mitigating the associated health risks that our patients with CKD might have coexisting and that significantly contribute to progression of CKD,” said Deep, who is also assistant clinical professor at the Medical College of Wisconsin, Wausau. “By addressing these risk factors, we can positively impact the health of our patients with CKD and decrease the morbidity and mortality, and health care costs. These predictive models can hopefully help us more accurately identify the risk of ASCVD thereby decreasing unnecessary diagnostic procedures and interventions which carry their own risks and morbidity.”

Looking ahead, “these predictive models should be assessed and validated in large studies in diverse populations and those with different risk factors for ASCVD because CKD can be caused by several different medical conditions each with potential to contribute to ASCVD,” Deep added.

Limitations and Next Steps

“Although we externally validated our models in two population-based cohort studies, the individuals in these datasets were selected based on only one assessment of kidney function,” Bundy noted. “Furthermore, the best practices for implementing risk prediction models in the clinic remain to be determined, especially as new models are developed.

“While our models show promising performance for predicting 10-year risk of atherosclerotic CVD, more clinical trials are needed to test implementation of these models for improving patient care and disease prevention.”

AI-based smartphone apps to spot skin cancer endanger the public, experts warn
Social stress prematurely ages your immune system, study finds
3 ways to improve your health through your gut microbiome
12 best subreddits to support your mental health and improve wellbeing
Health inequalities: Why is it harder for some people to eat healthily?