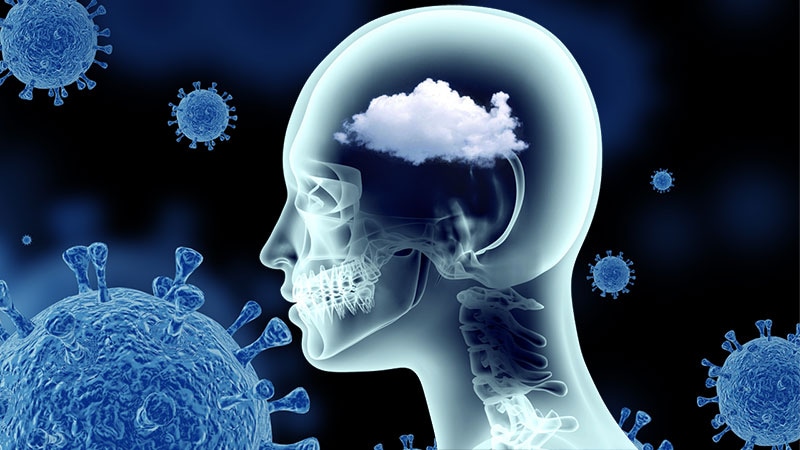 A small study may help explain the cause of “brain fog,” the lingering mental confusion reported in some people who’ve had COVID.

The study team looked at 32 adults who had recovered from COVID but didn’t require hospitalization, with 22 of them having cognitive symptoms, according to the study published in the Annals of Clinical and Translational Neurology. All participants underwent a series of in-person cognitive tests and were scored using criteria for HIV-associated neurocognitive disorder, or HAND.

Participants with brain fog had problems such as “remembering recent events, coming up with names or words, staying focused, and issues with holding onto and manipulating information, as well as slowed processing speed,” Joanna Hellmuth, MD, the study author and a member of the UCSF Memory and Aging Center, said in a university news release.

Seventeen participants agreed to have their cerebrospinal fluid analyzed, including 13 with brain fog symptoms. The fluid was taken an average of 10 months after COVID symptoms appeared.

Of the 13 participants with brain fog, 10 of them had abnormalities in their cerebrospinal fluid like those found in people with other infectious diseases, according to the study.

The abnormalities included elevated levels of protein that suggested inflammation and “the presence of unexpected antibodies found in an activated immune system,” the news release said. These could be “turncoat” antibodies that attack the body itself, the researchers said.

“It’s possible that the immune system, stimulated by the virus, may be functioning in an unintended pathological way,” Hellmuth said.

Cognitive problems have also been seen in people infected with other viruses, such as HIV, SARS, MERS, hepatitis C, and Epstein-Barr, the researchers said.

Participants with thinking problems had an average of 2.5 risk factors for impaired thinking, including diabetes and high blood pressure, vascular dementia, and a history of attention deficit hyperactivity disorder (ADHD). Participants who didn’t have thinking problems had an average of less than one risk factor, the study said.

Brain fog is often reported in COVID patients, according to the study. Recently, 67% of 156 post-COVID patients in New York reported having thinking problems.

Limitations in the study included the small sample size, with the researchers calling for more studies on the topic.