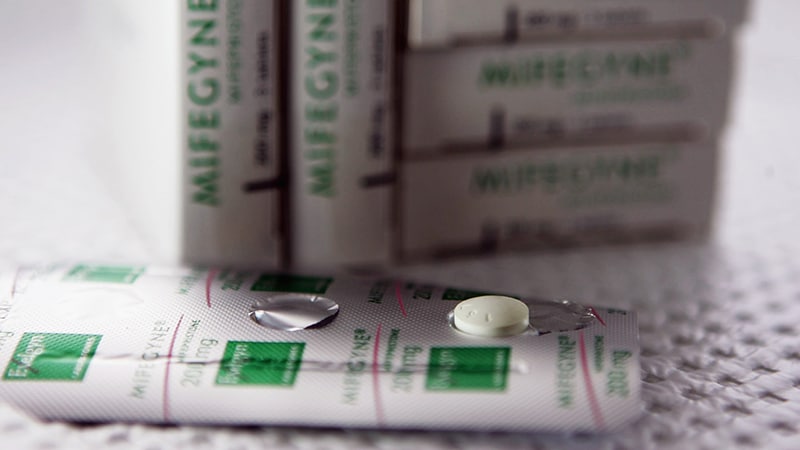 The Food and Drug Administration has announced that women no longer will have to pick up the abortion pill mifepristone (Mifeprex) in person at certain certified sites and can get a prescription via an online consultation and delivery through the mail.

In April 2021, the FDA lifted the in-person dispensing requirement for mifepristone for the duration of the COVID-19 pandemic and in December the agency made that decision permanent.

That decision came after suspension of the in-person dispensing requirement in response to COVID-19 safety concerns for patients as well as providers associated with in-person clinic visits.

The FDA decision comes as the Supreme Court nears a decision on whether to overturn its 1973 ruling on Roe v. Wade.

Additionally, the Supreme Court on returned a lawsuit over Texas’ ban on abortions after 6 weeks to a federal appeals court that has twice allowed the law to stay in effect, rather than to a district judge who wanted it blocked.

Alexis McGill Johnson, president and CEO, of the Planned Parenthood Federation of America, said in a statement, “Abortion is time sensitive, essential health care, and this decision will remove a sometimes insurmountable barrier for patients seeking an abortion. With abortion rights at risk like never before, the FDA’s decision is a long overdue step toward expanding people’s access to safe medication abortion.”

Catherine D. Cansino, MD, MPH, associate clinical professor in the department of obstetrics and gynecology at the University of California, Davis, and member of the editorial advisory board for ObGyn News said in an interview: “I think that this change is a long time coming and speaks to the fact that science matters and medicine prevails over politics. We need to protect health rights first!”

Others expressed doubt or outrage.

Fidelma Rigby, MD, a professor in the department of obstetrics and gynecology, division of maternal fetal medicine, Virginia Commonwealth University Medical Center, Richmond, said in an interview: “My concern is that what if there is an ectopic pregnancy? I’m not as enthusiastic as some of my partners would be about this announcement.”

“The FDA’s decision today places women at risk,” said Carol Tobias, president of the National Right to Life Committee. “These changes do not make this abortion process safer for women. What these changes do is make the process easier for the abortion industry.”

The antiabortion groups Charlotte Lozier Institute and the Susan B. Anthony List were among other organizations issuing statements against Dec. 16’s FDA ruling.

The FDA stated that mifepristone prescribers will still need to earn certification and training. Additionally, the agency said dispensing pharmacies will have to be certified.

The FDA said in updated guidance on its website that after conducting a review of the Risk Evaluation and Mitigation Strategy for mifepristone, it “determined that the data support modification of the REMS to reduce burden on patient access and the health care delivery system and to ensure the benefits of the product outweigh the risks.”

In 2018, an expert National Academies of Science, Engineering, and Medicine panel concluded that requiring that medication abortion be provided at only certain facilities, solely by a physician or in the physical presence of certain providers, did not improve safety or quality of care.

Mifepristone is used, together with misoprostol, to end an early pregnancy. The FDA first approved Mifeprex in 2000 for use through 10 weeks’ gestation. According to the FDA, mifepristone is approved in more than 60 other countries.

However, according to the Guttmacher Institute, 19 U.S. states have laws that bar telehealth consultations or mailing of abortion pills.

Reuters reported that women in those states would not be able to make use of the rule change get the drug delivered to their home but could potentially travel to other states to obtain medication abortion.

“States such as California and New York that have sought to strengthen access to abortion may make the drug available to women from other states,” Reuters reported.

Jessica Arons, senior advocacy and policy counsel for reproductive freedom at the ACLU, told CBS News, “Medication abortion is one more lens through which we see that we are witnessing a tale of two countries. Half the states are protecting access to abortion and half are trying every single way they can to eliminate access to abortion care.”

As this news organization has reported, a study found positive results when Canada lifted restrictions on access to the abortion pills and a good safety profile for mifepristone.

A study in the New England Journal of Medicine found abortion rates remained stable and adverse events were rare after mifepristone prescribing restrictions were lifted in Canada.

Senior author Wendy V. Norman, MD, professor in the department of family practice at the University of British Columbia, Vancouver, said in a statement, “Our study is a signal to other countries that restrictions are not necessary to ensure patient safety.”

Another recent study in JAMA Network Open (2021 Aug 24. doi: 10.1001/jamanetworkopen.2021.22320) found that abortion via telehealth prescriptions may be just as safe and effective as in-person care.

The study investigators said that, “of the 110 women from whom researchers collected remote abortion outcome data, 95% had a complete abortion without additional medical interventions, such as aspiration or surgery, and none experienced adverse events. Researchers said this efficacy rate is similar to in-person visits.”