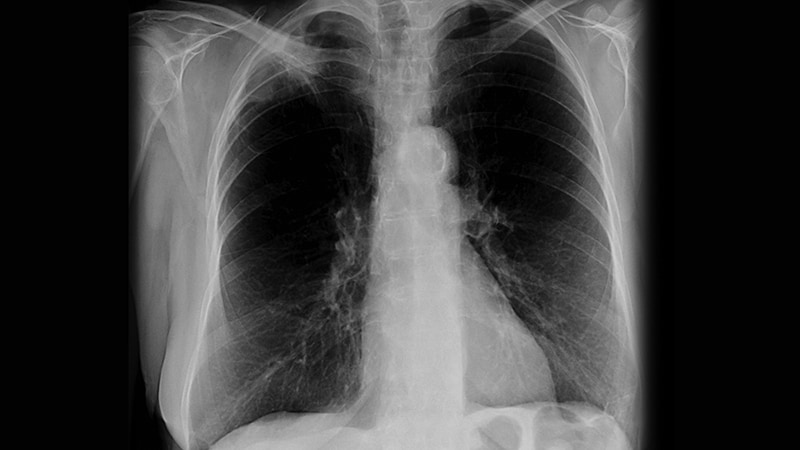 Immune checkpoint inhibitors (ICIs) are at least as effective in patients with advanced non-small cell lung cancer (NSCLC) and mild preexisting interstitial lung disease (ILD) as those without ILD. However, the risk of checkpoint inhibitor pneumonitis (CIP) is higher in patients with the dual diagnoses and they need careful monitoring when introducing an ICI, a systematic review and meta-analysis indicated.

The study was published online January 10 in the journal CHEST.

Preexisting ILD was diagnosed by using either CT or high-resolution CT. The mean age of patients was 71 years (range, 33-85 years), 87% were male and 96% of the cohort had a history of smoking. Approximately one quarter of patients with ILD had usual interstitial pneumonitis (UIP); about the same percentage had possible UIP; one third were diagnosed with inconsistent UIP; 14% had nonspecific interstitial pneumonia (NSIP), and 6% had indeterminate UIP.

Patients received ICIs either as first-, second-, or third-line or higher therapy and all were treated with ICI monotherapy by way of either nivolumab (Opdivo), pembrolizumab (Keytruda), or atezolizumab (Tecentriq). About 10% of patients had a PD-L1 tumor proportion score (TPS) of less than 1%, one quarter had a PD-L1 TPS of 1%–49%, and approximately two thirds had a TPS of 50% or greater.

Some 35% of patients with both NSCLC and preexisting ILD achieved an objective response rate (ORR) to ICI therapy and almost two thirds of patients achieved disease control. However, there was considerable heterogeneity in ORRs between the studies where it ranged from 5.9% to 70%, the authors caution.

In contrast to the ORR, there was no difference in the DCR between the two groups, with no evidence of heterogeneity. Interestingly, there were no significant differences between the two groups in either median progression-free survival (PFS) or overall survival (OS). In patients with NSCLC and preexisting ILD, median PFS ranged from 1.4 to 8 months whereas median OS ranged from 15.6 to 27.8 months.

For those without preexisting ILD, the median PFS ranged from 2.3 to 8.1 months while median OS ranged from 17.4 to 25.5 months.

The pooled incidence of grade 3 and higher CIP in the same group of patients was 15%. The median time from initiation of ICIs to the development of CIP ranged from 31 to 74 days, but 88% of patients who developed CIP improved with appropriate treatment. In patients with NSCLC who did not have ILD, the pooled incidence of CIP was 10% (95% CI, 6-13%), again with significant heterogeneity between studies (I2 = 78.8%). “Generally, CIP can be managed through ICI discontinuation with or without steroid administration,” the authors note.

Indeed, compared with patients without preexisting ILD, grade 3 or higher CIP in patients with the dual diagnosis was significantly higher at an OR of 3.23 (95%, 2.06 -5.06), investigators emphasize.

A limitation to the review and systemic meta-analysis included the fact that none of the studies analyzed were randomized clinical trials and most of the studies were retrospective and had several other shortcomings.

Asked to comment on the review, Karthik Suresh, MD, associate professor of medicine, Johns Hopkins School of Medicine, Baltimore, Maryland, pointed out that ILD is really an “umbrella” diagnosis that a few hundred diseases fit under, so the first question he and members of his multidisciplinary team ask is: What is the nature of the ILD in this patient? What is the actual underlying etiology?

It could, for example, be that the patient has undergone prior chemotherapy or radiation therapy and has developed ILD as a result, as Suresh and his co-author, Jarushka Naidoo, MD, Sidney Kimmel Comprehensive Cancer Center, Baltimore, point out in their paper on how to approach patients with preexisting lung disease to avoid ICI toxicities. “We’ll go back to their prior CT scans and can see the ILD has been there for years — it’s stable and the patient’s lung function is not changing,” Suresh related to Medscape Medical News.

“That’s a very different story from a patient in whom there are new interstitial changes, who are progressing and who are symptomatic,” he noted. Essentially, what Suresh and his team members want to know is: What is the specific subdiagnosis of this disease, how severe is it, and is it progressing? Then they need to take the tumor itself into consideration.

“Some tumors have high PD-L1 expression, others have low PD-L1 expression so response to immunotherapy is usually very different based on tumor histology,” Suresh pointed out. Thus, the next question that needs to be addressed is: What is the expected response of the tumor to ICI therapy? If a tumor is exquisitely sensitive to immunotherapy, “that changes the game,” Suresh said, “whereas with other tumors, the oncologist might say there may be some benefit but it won’t be dramatic.”

The third risk factor for ICI toxicity that needs to be evaluated is the patient’s general cardiopulmonary status — for example, if a patient has mild, even moderate, ILD but is still walking 3 miles a day, has no heart problems, and is doing fine. Another patient with the same severity of disease in turn may have mild heart failure, be relatively debilitated, and sedentary: “Performance status also plays a big role in determining treatment,” Suresh emphasized.

The presence of other pulmonary conditions such as chronic obstructive pulmonary disease — common in patients with NSCLC — has to be taken into account too. Lastly, clinicians need to ask themselves if there are any alternative therapies that might work just as well if not better than ICI therapy for this particular patient. If the patient has had genomic testing, results might indicate that the tumor has a mutation that may respond well to targeted therapies. “We put all these factors out on the table,” Suresh said.

“And you obviously have to involve the patient too so they understand the risks of ICI therapy and together we decide, ‘Yes, this patient with ILD should get immunotherapy or no, they should not,’ ” he said.

The study had no specific funding. The study authors and Suresh have disclosed no relevant financial relationships.

Grace Victory shares 4 simple ways to find a moment for mindfulness in your daily routine
3 ways to improve your health through your gut microbiome
Several U.S. states immediately ban abortion after Supreme Court overturns Roe v. Wade
Some states move quickly to ban abortion after Supreme Court ruling
How are the Pfizer and Moderna vaccines for young children different?