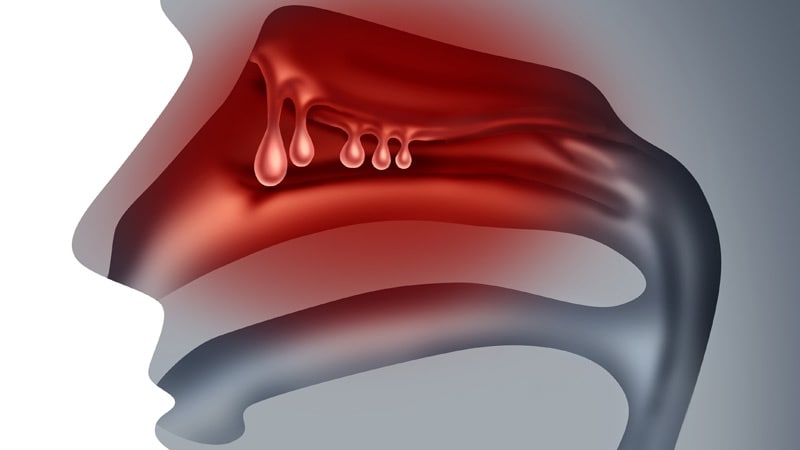 A study of the nasal microbiome helped researchers predict recurrent polyps in chronic rhinosinusitis patients with more than 90% accuracy, based on data from 85 individuals.

Chronic rhinosinusitis with nasal polyps (CRSwNP) has a significant impact on patient quality of life, but the underlying mechanism of the disease has not been well studied, and treatment options remain limited, wrote Yan Zhao, MD, of Capital Medical University, Beijing, China, and study coauthors.

Previous research has shown that nasal microbiome composition differs in patients with and without asthma, and some studies suggest that changes in microbiota could contribute to CRSwNP, the authors wrote. The researchers wondered if features of the nasal microbiome can predict the recurrence of nasal polyps after endoscopic sinus surgery and serve as a potential treatment target.

In a study in Allergy, the researchers examined nasal swab samples from 85 adults with CRSwNP who underwent endoscopic sinus surgery between August 2014 and March 2016 at a single center in China. The researchers performed bacterial analysis and gene sequencing on all samples.

The patients ranged in age from 18-73 years, with a mean age of 46 years, and included 64 men and 21 women. The primary outcome was recurrence of polyps. Of the total, 39 individuals had recurrence, and 46 did not.

When the researchers compared microbiota from swab samples of recurrent and nonrecurrent patients, they found differences in composition based on bacterial genus abundance. “Campylobacter, Bdellovibrio, and Aggregatibacter, among others, were more abundant in swabs from CRSwNP recurrence samples, whereas Actinobacillus, Gemella, and Moraxella were more abundant in non-recurrence samples,” they wrote.

The researchers then tested their theory that distinct nasal microbiota could be a predictive marker of risk for future nasal polyp recurrence. They used a training set of 48 samples and constructed models from nasal microbiota alone, clinical features alone, and both together.

The regression model identified Porphyromonas, Bacteroides, Moryella, Aggregatibacter, Butyrivibrio, Shewanella, Pseudoxanthomonas, Friedmanniella, Limnobacter, and Curvibacter as the most important taxa that distinguished recurrence from nonrecurrence in the specimens. When the model was validated, the area under the curve was 0.914, yielding a predictor of nasal polyp recurrence with 91.4% accuracy.

“It is highly likely that proteins, nucleic acids, and other small molecules produced by nasal microbiota are associated with the progression of CRSwNP,” the researchers noted in their discussion of the findings. “Further, the nasal microbiota could maintain a stable community environment through the secretion of various chemical compounds and/or inflammatory factors, thus playing a central role in the development of CRSwNP.”

The study findings were limited by several factors, including the analysis of nasal flora only at the genus level in the screening phase, the use only of bioinformatic analysis for recurrence prediction, and the inclusion only of subjects from a single center, the researchers noted. Future studies should combine predictors to increase accuracy and include deeper sequencing, they said. However, the results support data from previous studies and suggest a strategy to meet the need for predictors of recurrence in CRSwNP, they concluded.

“There is a critical need to understand the role of the upper airway microbiome in different phenotypes of CRS,” said Emily K. Cope, PhD, assistant director at the Pathogen and Microbiome Institute, Northern Arizona University, Flagstaff, in an interview. “This was one of the first studies to evaluate the predictive power of the microbiome in recurrence of a common CRS phenotype—CRS with nasal polyps,” she said. “Importantly, the researchers were able to predict recurrence of polyps prior to the disease manifestation,” she noted.

“Given the nascent state of current upper airway microbiome research, I was surprised that they were able to predict polyp recurrence prior to disease manifestation,” Cope said. “This is exciting, and I can imagine a future where we use microbiome data to understand risk for disease.”

What is the take-home message for clinicians? Although the immediate clinical implications are limited, Cope expressed enthusiasm for additional research. “At this point, there’s not a lot we can do without validation studies, but this study is promising. I hope we can understand the mechanism that an altered microbiome might drive (or be a result of) polyposis,” she said.

The study was supported by the National Natural Science Foundation of China, the program for the Changjiang scholars and innovative research team, the Beijing Bai-Qian-Wan talent project, the Public Welfare Development and Reform Pilot Project, the National Science and Technology Major Project, and the CAMS Innovation Fund for Medical Sciences. The researchers disclosed no financial conflicts. Cope disclosed no financial conflicts.