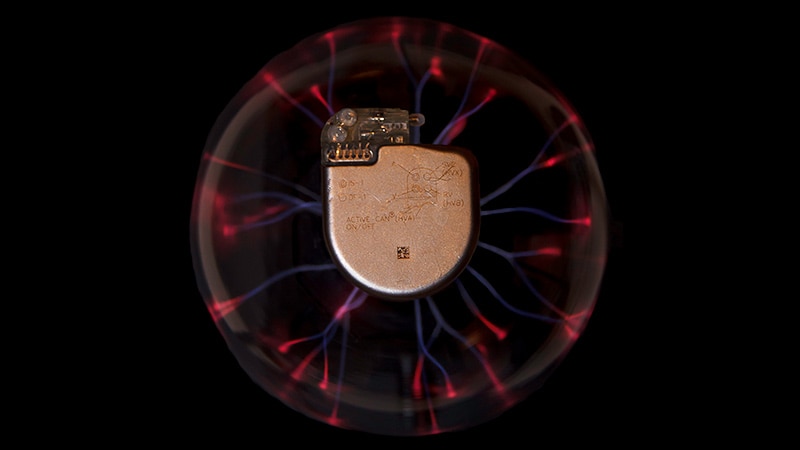 Building on several previous reports that the newest models of mobile telephones and other electronics that use magnets pose a threat to the function of defibrillators and other implantable cardiovascular devices, a new study implicates any device that emits a 10-gauss (G) magnetic field more than a couple of inches.

“Beside the devices described in our manuscript, this can be any portable consumer product [with magnets] like electric cigarettes or smart watches,” explained study author Sven Knecht, DSc, a research electrophysiologist associated with the department of cardiology, University Hospital Basel (Switzerland).

In the newly published article, the investigators evaluated earphones, earphone charging cases, and two electronic pens used to draw on electronic tablets. These particular devices are of interest because, like mobile phones, they are of a size and shape to fit in a breast pocket adjacent to where many cardiovascular devices are implanted.

The study joins several previous studies that have shown the same risk, but this study used three-dimensional (3D) mapping of the magnetic field rather than a one-axis sensor, which is a standard adopted by the U.S. Food and Drug Administration, according to the investigators.

Because of the 3D nature of magnetic fields, 3D mapping serves as a better tool to assess the risk of the magnetic force as the intensity gradient diminishes with distance from the source, the authors contended. The 3D maps used in this study have a resolution to 2 mm.

The ex vivo measurements of the magnetic field, which could be displayed in a configurable 3D volume in relation to the electronic products were performed on five different explanted cardioverter defibrillators from two manufacturers.

In the ex vivo setting, the ability of the earphones, earphone charging cases, and electronic pens to interfere with defibrillator function was compared to that of the Apple iPhone 12 Max, which was the subject of a small in vivo study published in 2021. When the iPhone 12 Max was placed on the skin over a cardiac implantable device in that study, clinically identifiable interference could be detected in all 3 patients evaluated.

Based on previous work, the International Organization for Standardization has established that a minimal field strength of 10 G is needed to interfere with an implantable device, but the actual risk from any specific device is determined by the distance at which this strength of magnetic field is projected.

In an interview, Knecht explained that this study adds more devices to the list of those associated with potential for interfering with implantable cardiovascular devices, but added that the more important point is that any device that contains magnets emitting a force of 10 G or greater for more than a few inches can be expected to be associated with clinically meaningful interference. The devices tested in this study were produced by Apple and Microsoft, but a focus on specific devices obscures the main message.

“All portable electronics with an embedded permanent magnet creating a 10-G magnetic field have a theoretical capability of triggering implantable devices,” he said.

For pacemakers, the interference is likely to trigger constant pacing, which would not be expected to pose a significant health threat if detected with a reasonable period, according to Knecht. Interference is potentially more serious for defibrillators, which might fail during magnetic interference to provide the shock needed to terminate a serious arrhythmia.

The combination of events – interference at the time of an arrhythmia – make this risk “very low,” but Knecht said it is sufficient to mean that patients receiving an implantable cardiovascular device should be made aware of the risk and the need to avoid placing portable electronic products near the implanted device.

When in vivo evidence of a disturbance with the iPhone 12 was reported in 2021, it amplified existing concern. The American Heart Association maintains a list of electronic products with the potential to interfere with implantable devices on its website. But, again, understanding the potential for risk and the need to keep electronic products with magnets at a safe distance from cardiovascular implantable devices is more important than trying to memorize the ever-growing list of devices with this capability.

“Prudent education of patients receiving an implantable device is important,” said N.A. Mark Estes III, MD, professor of medicine in the division of cardiology at the University of Pittsburgh. However, in an interview, he warned that the growing list of implicated devices makes a complete survey impractical, and, even if achievable, likely to leave patients “feeling overwhelmed.”

In Estes’s practice, he does provide printed information about the risks of electronics to interfere with implantable devices as well as a list of dos and don’ts. He agreed that the absolute risk of interference from a device causing significant clinical complications is low, but the goal is to “bring it as close to zero as possible.”

Knecht and coinvestigators, along with Estes, reported no potential conflicts of interest.

How Much Weight Did We Really Gain During COVID Lockdown?
Greenwashing: what is it and how is it preventing businesses from making a real difference to our planet?
AI-based smartphone apps to spot skin cancer endanger the public, experts warn
Jay Blades on restoring hope in the community and the importance of human connection
How to be a better ally to the LGBTQ community