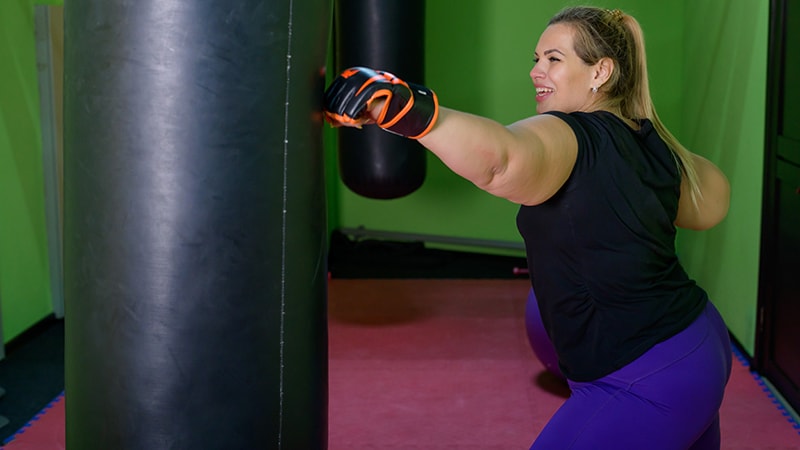 Metabolic adaptation — slowing of metabolism in response to weight loss — increases the length of time needed to achieve a target lower weight, a new study of premenopausal women with overweight reports.

All of the 65 sedentary young and middle-aged women with overweight who were on a low-calorie diet (800 calories/day) attained their target lower weight (corresponding to a body mass index [BMI] ≤ 25 kg/m2) after 66 to 252 days.

The study by Catia Martins, PhD, and colleagues was published January 27 in Obesity.

“Even though adherence to the diet is clearly the most important determinant of time to reach weight loss goals,” write Martins and colleagues, “the present findings are of great clinical relevance as they mean that individuals who are struggling to achieve weight loss goals, despite assuring compliance with the diet, may indeed be ‘suffering’ from metabolic adaptation during active weight loss.”

“This study shows that a longer than expected duration of intervention to achieve weight loss targets might be due to metabolic adaptation, even after controlling for adherence to the diet,” Martins summarized in an email to Medscape Medical News.

However, “the good news is that this mechanism disappears once weight is stabilized (a new energy balance is established), and it is not a predictor of weight regain in the long-term,” noted Martins, associate professor, nutrition sciences research, University of Alabama at Birmingham.

The group published a study in August 2020 showing that metabolic adaptation does not predict weight regain at 1 year, and another study published a few months earlier, in May 2020, showed it is not a barrier to weight-loss maintenance.

The current study findings “provide further evidence of the ways that physiology fights back when people are trying to lose weight,” David B. Sarwer, PhD, who was not involved with this research, said in a press release from the Obesity Society.

“A countless number of environmental variables and other social determinants of health also make weight loss and maintenance challenging for many individuals,” added Sarwer, director of the Center for Obesity Research and Education at the College of Public Health at Temple University in Philadelphia, Pennsylvania.

“Nevertheless, it is import to remember that even a modest weight loss of 5% of initial body weight — much smaller than seen in this study — is associated with clinically significant improvements in weight-related health issues for many individuals,” he stressed.

It is unclear whether metabolic adaptation contributes to resistance to weight loss by increasing the time necessary to achieve weight-loss goals.

To investigate this, Martins and her fellow researchers analyzed data from 36 White women and 29 Black women, aged 20 to 41 (mean age, 36), who had a mean BMI of 28.6 kg/m2 and had participated in the diet arms of two studies (ROMEO and JULIET) conducted at Martins’ institution.

Metabolic adaption was measured 4 weeks after weight stabilization after reaching the weight-loss target.

On average, participants’ resting metabolic rate after weight loss was 46 kcal lower than what would be expected for their lower body weight.

Metabolic adaptation after weight loss was a significant predictor of time to reach the weight-loss goal, after adjusting for target weight loss, energy deficit, and adherence to the diet (R 2 adjusted = 0.63; P < .001).

The study findings may not be generalizable to men, older patients, or people with a higher BMI, so further research is needed in a broader population, the researchers conclude.

The research was supported by National Institutes of Health grants. Martins was supported by a sabbatical grant from the Liaison Committee for Education, Research and Innovation in Central Norway and the Norwegian University of Science and Technology. The researchers have no relevant financial disclosures.