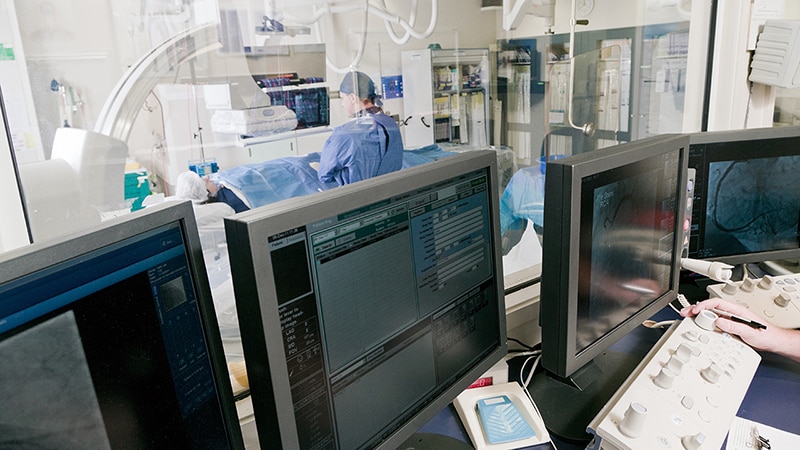 Despite recent strides in medical therapy for heart failure with preserved ejection fraction (HFpEF), many patients with HFpEF who don’t respond well to available meds could potentially benefit from one of a growing array of device therapies for heart failure.

Hopes were high, for example, for an investigational interatrial shunt implant (IASD System II, Corvia Medical) that promotes left atrial (LA) unloading after a 2017 trial and earlier research suggested it improved intracardiac pressures at exercise — a goal of some heart failure drug therapies — in selected patients with HFpEF.

But in a new randomized trial of 626 patients with heart failure and either mid-range or preserved left ventricular ejection fraction (LVEF), those receiving the transcatheter implant showed no 12-month clinical advantage over patients who underwent a sham control procedure. There was even a signal of possible harm — a higher rate of cardiac events, part of the prespecified composite safety endpoint — in the shunt group.

Although the trial was “neutral overall,” he noted, three subgroups showed significantly increased risk for the study’s primary efficacy endpoint: patients with pulmonary artery (PA) pressures exceeding 70 mm Hg at exercise, those with a right atrial (RA) volume index in the upper tertile, and men in general.

“Whereas the opposite [was seen] in women, those with smaller RA volumes, and those with lower PA pressures” during 20W bicycle exercise, “suggesting an important differential result,” said Shah, who is also lead author on the same-day publication of the trial, called REDUCE LAP-HF 2, in The Lancet.

“We hypothesized that if we enriched for responders based on screening echo and invasive exercise hemodynamics, we would find the right group,” that is, patients with an HFpEF phenotype that might respond especially well to treatment with the interatrial shunt device, Shah explained.

Although that didn’t happen in the primary analysis, a post-hoc exploratory analysis hinted at a hemodynamic marker that might tag potentially better responders to shunt therapy. Patients with peak pulmonary vascular resistance (PVR) at less than the upper limit of normal (ULN) at exercise did better for the primary efficacy endpoint with the shunt device than without it.

“We had excluded patients that we thought wouldn’t benefit.” Shah said, but “what we found is that we need to go further. We need to exclude patients with pulmonary vascular disease that’s dynamic during exercise.” Had that been among the REDUCE LAP-HF 2 exclusion criteria, it still would leave two thirds of the population eligible for the trial, he said.

The trial clearly entered a more heterogeneous population than anticipated, observed trialist Scott D. Solomon, MD, Brigham and Women’s Hospital, Harvard Medical School, Boston, during the session. The study’s hypothesis-generating analyses, he said, point to “patients who have exercise-induced LA pressure elevation, but who don’t have increased pulmonary vascular resistance with exercise,” as a subgroup that might benefit the most from the shunt device therapy.

“Many patients with HFpEF, even though their resting PVR may not be very different than normal controls and doesn’t appear to be above the level we normally consider to be pathologic, may have abnormalities that are dynamic — an inability to reduce pulmonary vascular resistance during exercise,” explained REDUCE LAP-HF 2 trialist Barry A. Borlaug, MD, during his presentation on the study.

“We propose the following hypothesis — that patients with HFpEF or mildly reduced EF and what we call latent pulmonary vascular disease, might be harmed by shunt implantation, whereas patients without latent PVD might derive benefit,” said Borlaug, from the Mayo Clinic in Rochester, Minnesota.

“You just have to be very careful looking at positive subgroup data from a negative trial,” observed Gregg W. Stone, MD, Icahn School of Medicine at Mount Sinai, New York City, during a discussion panel on the trial results.

“In general, it’s a fascinating analysis, especially because you have an underlying mechanism. But it really does need to be proven in a prospective validation study before it should be accepted as gospel,” said Stone, who is not an author on the study’s publication or listed as a site investigator.

The trial, conducted at 89 centers in Australia, Europe, Japan, and North America, randomly assigned its 626 patients with mostly NYHA class 3 heart failure and preserved or mid-range LVEF — the median was 60% — who met its criteria for exercise hemodynamics to receive the interatrial shunt device or undergo a sham procedure.

Questionnaires periodically completed by the patients, the published report notes, “showed that, over the course of the study, 598 (96%) patients remained unaware of their treatment allocation.

The win ratio for shunt therapy vs control was nonsignificant at 1.0 (95% CI 0.8 – 1.2, P = .85). Nor were there significant differences for the composite endpoint’s individual components.

Other Markers Not Enough

Some panelists wondered whether invasive exercise hemodynamic testing would be practical as a real-world requirement for selecting patients for the shunt device therapy.

“Is there any other way to identify that group?” asked Michael R. Zile, MD, Medical University of South Carolina, Charleston. Might there be a biomarker, for example natriuretic peptide levels, that could flag potential responders “short of an exercise test and the response in terms of PVR?” Zile is listed as a REDUCE LAP-HF 2 site investigator but is not a co-author on the publication.

“You can kind of get a signal, a hint, from other things,” Borlaug replied. “Probably the right combination of less invasive, non-exercise data could point you the right way for a number of patients who would be nonresponders. But to really know, I think you need the invasive exercise phenotyping to understand the proper patient,” he said. “Really, the only thing that brings it out is the exercise pulmonary vascular resistance.”

“These neutral results will be disappointing to physicians and patients worldwide given the clinical need for more treatment options for heart failure,” observe Navin K. Kapur, MD, and colleagues, Tufts Medical Center, Boston in an editorial accompanying the Lancet publication. “Fortunately, important lessons that emerge from this trial provide necessary insight for future studies.”

The REDUCE LAP-HF-2 researchers, they continue, “have generated novel and necessary insight to advance the field by potentially answering pertinent questions” regarding differential subgroup effects, hemodynamic criteria for study, and relevant patient assessments.

“In answering these questions,” write Kapur and colleagues, “we can hopefully determine whether the future armamentarium of heart failure therapies should include interatrial shunts and identify the correct population likely to benefit from this innovative approach.”

The Corvia interatrial shunt device remains investigational in the United States but is available in Europe. The prospective European postmarket observational study REDUCE LAP-HF 3 is following what will be an estimated 500 patients implanted with the device for HFpEF or heart failure with mid-range LVEF despite guideline-directed meds.

CDC Endorses COVID-19 Vaccines For Children 5 And Below
Health inequalities: Why is it harder for some people to eat healthily?
CDC Advisers Recommend Moderna Vaccine For Children 6 And Above
This may be the most creative path to mental health you’ve never tried
3 ways to improve your health through your gut microbiome