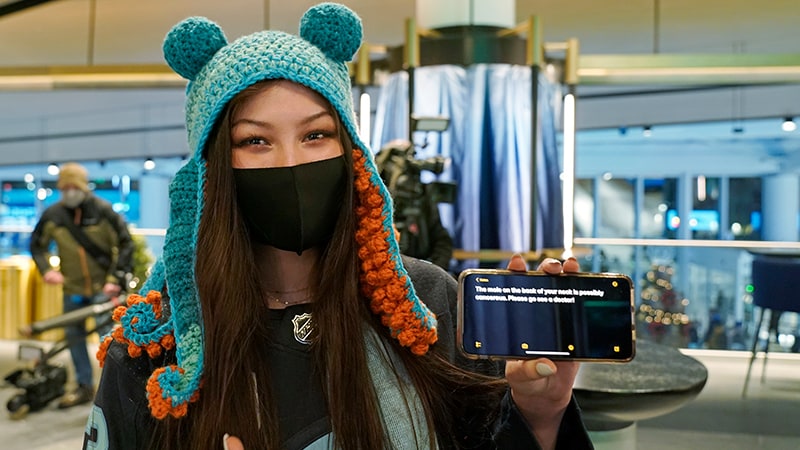 A soon-to-be medical student and former oncology ward volunteer has received a $10,000 scholarship for her education this week after tipping off a Vancouver Canucks staff member about a cancerous mole on the back of his neck during a National Hockey League game in Seattle this past October.

Sitting immediately behind the visiting team’s bench, Nadia Popovici wrote a large-font message on her cell phone and tapped the protective glass to get the attention of Brian Hamilton, assistant equipment manager for the Canucks.

“The mole on the back of your neck is possibly cancerous. Please go see a doctor!” read the message.

Hamilton acted on the tip and was eventually diagnosed with a malignant stage II melanoma, according to a report in The Seattle Times.

As noted in a Medscape Q&A, “ABCDE” is the acronym that indicates the visible, physical characteristics suggestive of melanoma. ABCDE stands for asymmetry, irregular border, color variations (especially red, white, and blue tones in a brown or black lesion), diameter greater than 6 mm, and elevated surface. The lesions may itch, bleed, ulcerate, or develop satellites.

The Canucks returned to Seattle this week for another game against the Seattle Kraken, and the visiting team posted a note on social media from Hamilton seeking the identity of the good Samaritan.

“…the message you showed me on your cell phone will forever be etched into my brain and has made a true life-changing difference for me and my family,” wrote Hamilton.

Within hours, Popovici’s mother, whose family has season tickets to the Seattle team’s games, responded to the message.

Popovici and Hamilton met up again at the January 1 game, where Popovici was rewarded with a $10,000 medical school scholarship in a surprise announcement, shared on Twitter and liked more than 42,000 times.

“She didn’t take me out of a burning car like the big stories, but she took me out of a slow fire. And the words out of the doctor’s mouth were, if I ignored that for four to five years, I wouldn’t be here,” Hamilton said at a news conference on Saturday.

Popovici says she has been accepted to several medical schools and will start school in the fall, according to a press release from the National Hockey League.

More money for medical school may be on the way for Popovici after a GoFundMe page was started this week. With a goal of $25,000, the fund had received just over $2500 as of January 4.

“The teams made a kind gesture of giving her 10k, but I think we can do better!” writes Josh Doxey, a sales manager from Lehi, Utah, on the page he created for Popovici.

Doxey told Medscape Medical News, “I started the GoFundMe thinking it would be a nice gesture especially for someone going into healthcare after 2 crazy years of COVID…. I have gotten in touch with her and her mother, and have been chatting with both. They both seem incredibly kind, grateful and humble.”

Nick Mulcahy is an award-winning senior journalist for Medscape, specializing in oncology. Email nmulcahy@medscape.net and on Twitter: @MulcahyNick.

Covid is still keeping hospitals backed up, even as new admissions stay low
World Health Organization says monkeypox is not a global health emergency right now
US set to offer monkeypox vaccines in states with high case rates
In memory of Dame Deborah James
Childhood Melatonin Poisonings Skyrocket in the Past 10 Years