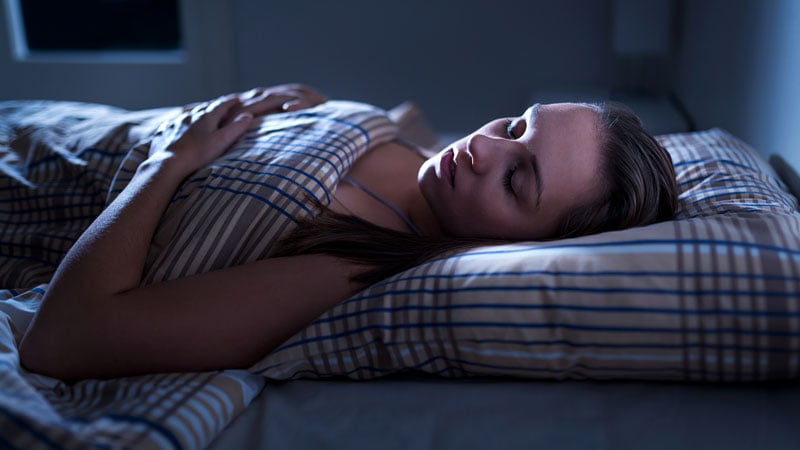 People who don’t get enough sleep during the week may be able to reduce their risk for nonalcoholic fatty liver disease (NAFLD) by catching up on the weekends, researchers say.

“Our study revealed that people who get enough sleep have a lower risk of developing NAFLD than those who get insufficient sleep,” wrote Sangheun Lee, MD, PhD, from Catholic Kwandong University College of Medicine in Incheon Metropolitan City, Republic of Korea, and colleagues, in Annals of Hepatology.

However, they cautioned that further research is needed to verify their finding.

A busy weekday schedule can make it harder to get enough sleep, and some people try to compensate by sleeping longer on weekends.

Studies so far have produced mixed findings on this strategy, with some showing that more sleep on the weekend reduces the risk for obesity, hypertension, and metabolic syndrome, and others showing no effect on metabolic dysregulation or energy balance.

To explore the relationship between sleep patterns and NAFLD, Lee and colleagues analyzed data from Korea National Health and Nutrition Examination Surveys collected from 2008 to 2019. They excluded people < 20 years of age, those with hepatitis B or C infections, liver cirrhosis or liver cancer, shift workers and others who “slept irregularly,” and those who consumed alcohol excessively, leaving a cohort of 101,138 participants.

Set 1 was further divided into those who averaged more than 7 hours of sleep per day and those who slept less than that.

The researchers used the hepatic steatosis index (HSI) to determine the presence of a fatty liver, calculated as 8 × (ratio of serum alanine aminotransferase to serum aspartate aminotransferase) + body mass index (+ 2 for female, + 2 in case of diabetes). An HSI of ≥ 36 was considered an indicator of fatty liver.

All these associations held true for both men and women.

Why Getting Your Z’s May Have Hepatic Advantages

One explanation for the link between sleep patterns and NAFLD is that dysregulation of cortisol, inflammatory cytokines, and norepinephrine are associated with both variations in sleep and NAFLD onset, Lee and colleagues wrote.

They also point out that a lack of sleep can reduce the secretion of two hormones that promote satiety: leptin and glucagon-like peptide-1. As a result, people who sleep less may eat more and gain weight, which increases the risk for NAFLD.

Ashwani K. Singal, MD, MS, a professor of medicine at the University of South Dakota in Vermillion, who was not involved in the study, noted that it was based on comparing a cross-section of a population instead of following the participants over time.

“So, I think it’s an association rather than a cause and effect,” he told Medscape Medical News.

The authors don’t report a multivariate analysis to determine whether comorbidities or other characteristics of the patients could explain the association, he pointed out, noting that obesity, for example, can increase the risk for both NAFLD and sleep apnea.

Still, he said, the paper will influence him to mention sleep in the context of lifestyle factors that can affect fatty liver disease. “I’m going to tell my patients, and tell the community physicians to tell their patients, to follow a good sleep hygiene and make sure that they sleep at least five to seven hours.”

Singal and the study authors all report no relevant financial relationships. The study was supported by the National Research Foundation of Korea.

Laird Harrison writes about science, health, and culture. His work has appeared in national magazines, in newspapers, on public radio, and on websites. He is at work on a novel about alternate realities in physics. Harrison teaches writing at the Writers Grotto. Visit him at www.lairdharrison.com or follow him on Twitter: @LairdH.

Women More Likely To Develop Long COVID, Study Claims
Why haven’t we cured cancer?
CDC Releases New Details on Mysterious Hepatitis in Children
‘Medicine Is Not a Stable Thing’: What We Heard This Week
Far from being ‘post pandemic,’ UK Covid cases are on the rise again